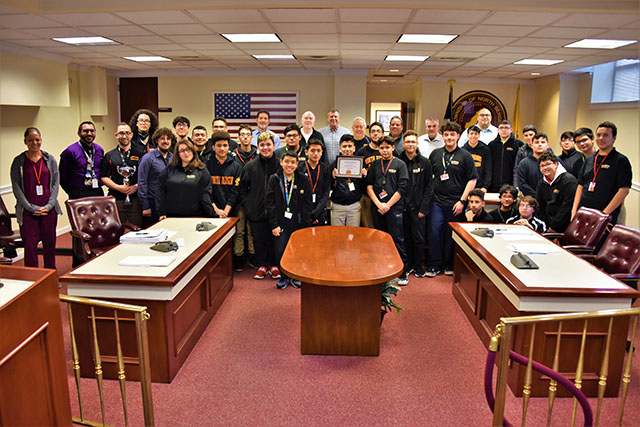 North Bergen High School’s (NBHS) Bruins eSports Team was recognized for their accomplishments by Mayor Nicholas Sacco and the Board of Commissioners during the commission meeting on Wednesday, Feb. 12. The Bruins were crowned last December as the first-ever Helix eSports Champions, triumphing over a crowded field of surrounding districts including Union City, West New York, Weehawken, and Rutherford.

The competition took place over five different video games, with North Bergen taking first place every time in Overwatch and Rocket League, and placing either first or second in Fortnite, League of Legends, and Super Smash Brothers. At the tournament, recruiters from St. Peter’s University and The College of Saint Rose were present and are actively recruiting two North Bergen students. The students have visited the campus and met their team. The eSports team is hopeful that the students will be offered scholarships to attend St. Peter's University in the Fall to play for their eSports team.

Also at the commission meeting to congratulate the players were School Superintendent Dr. George Solter, NBHS Principal Richard Locricchio, and Team Coach Jared Keshishian, along with other school officials and administrators.

Additional Photos in the Online Gallery